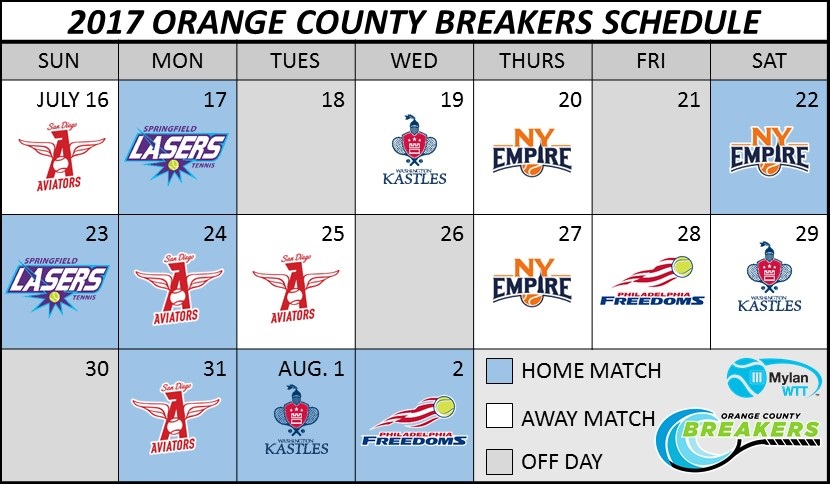 “The 2017 schedule worked out well in the fact that Breakers fans will get to see every team in the league at least once,” said Breakers General Manager Allen Hardison. “We also get to host our rival San Diego twice, so we are very much looking forward to welcoming all these great teams and players to Orange County this summer.”

The Breakers will start the 2017 season on the road July 16 when they visit the San Diego Aviators at La Costa Resort in Carlsbad, Calif. Following the road tilt in San Diego, the Breakers return to Orange County for the home opener against the Springfield Lasers on July 17 at 6:05pm. Springfield is led by rising Russian star Daria Kasatkina and Dutch doubles sensation Jean-Julien Rojer.

The Breakers head East to face the Washington Kastles on July 19 and New York Empire on July 20 before returning home July 22 to face the Empire at 7:05pm. The Empire will be led by Belgian Kirsten Flipkens, 2016 Olympian Guido Pella and former University of Southern California standout Maria Sanchez. The home stand continues when the Lasers come back to Orange County on Sunday, July 23 for a 5:05pm match. Before heading back out on the road, the Breakers will host the 2016 Mylan WTT Champions, the San Diego Aviators at 6:05pm on July 24. San Diego’s lineup will consist of Raven Klassen, Rajeev Ram, Shelby Rogers and Darija Jurak.

After a four match road trip at San Diego on July 25, New York on July 27, Philadelphia on July 28 and Washington D.C. on July 29, the Breakers will complete the 2017 regular season with a three match home stand that begins July 31 when the Breakers host San Diego at 6:05pm. Washington comes to Orange County on August 1 for a 6:05pm start and will bring a strong team that consists of longtime Kastles Madison Brengle and Anastasia Rodionova.

The 2017 season concludes with a home match on Fan Appreciation Night against the Philadelphia Freedoms on August 2 at 6:05pm. The Freedoms are led by first round draft picks Darian King and American Taylor Townsend.

All Breakers home matches will be played at Breakers Stadium at Palisades Tennis Club. All times listed are Pacific Standard Time (PST) and all players and start times are subject to change. 2017 Breakers Season tickets will be going on sale in early April. For the complete schedule, ticket information and more, please visit www.BreakersTennis.com or call the Breakers front office at (949) 434-4560.