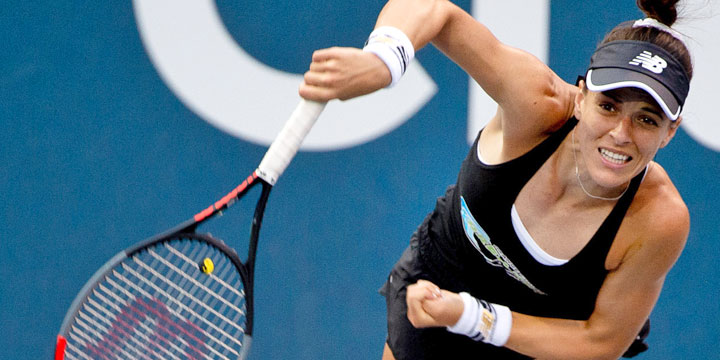 BRONX, N.Y. – A Grand Slam champion was on hand for the New York Empire, but it was an inspiring NCAA and World TeamTennis champion who stole the show on Thursday night.

Nicole Gibbs led the visiting Orange County Breakers to a 22-15 overall win at the Cary Leeds Center for Tennis and Learning with a pair of victories, which included a 5-3 win against 2017 U.S. Open Champion Sloane Stephens in women’s singles. Stephens is currently ranked No. 8 in the WTA Rankings, making her the highest ranked singles player in World TeamTennis.

Boom! @BreakersTennis 🌊move into the win column, defeating the #NYEmpire 22-15 on the road as Brits @JamesWardtennis and @Bambo290 close out the victory with a win in doubles. #WTT2019 #EveryPointCounts #OCvsNY pic.twitter.com/7nAhWy8Q4m

The 2016 WTT Female MVP helped Orange County win the King Trophy in 2017 and was a two-time NCAA Division I champion in singles at Stanford — as well as a doubles and team champion once — but scored the biggest victory of her life away from the tennis court earlier this year.

In early May, Gibbs announced on social media that she would be taking a break from tennis, as she was diagnosed with mucoepidermoid carcinoma, or cancer of the salivary gland.

Later that month, she underwent surgery and was proclaimed cancer-free.

“It gives you a new perspective, going through something like that,” Gibbs said after Thursday’s match.

“My health is good and I’m back to pretty much 100 percent physically. It’s just building my body back in playing shape now.

“I just really want to enjoy being on the court, competing and doing what I love.”

The 26-year-old returned to professional tennis just last week, and made the final of her comeback event, and her competitive spirit shone through on Thursday night.

After taking an early lead in the women’s singles set — the second event of the night — she scored her first singles win of the 2019 WTT season over the Empire’s Franchise Player with a decisive break in the final game.

“I started leaving the ball a little bit shorter, and I think I was a little tense wanting to get over the line for my teammates,” Gibbs added.

“I think I got a few errors from her in the end, and I was lucky to get through it, so I can hopefully build off that.

She later teamed with Andreja Klepac to earn an identical 5-3 win in women’s doubles over Stephens and Kirsten Flipkens, from a break down, as the visiting team won four of five sets after seeing their match on Wednesday night against the Washington Kastles washed out due to heavy rain.

The lone bright spot for the Empire was the hard-serving and big-hitting Ulises Blanch, who scored his first singles win of the season against James Ward in the third and middle set, 5-2.

“Yesterday was very frustrating for us, not getting to play, so we were just happy to be back on the court,” added Gibbs.

“To get a road win was awesome and it will be really good for our confidence moving forward.”

There was a decidedly British feel to Thursday’s match, as New York’s Neal Skupski squared off against compatriots Ward and Luke Bambridge over the course of the evening.

The Breakers have family ties to the Skupskis, too — Neal’s older brother, Ken, was a member of the Breakers’ King Trophy-winning team alongside Gibbs in 2017.

Thursday’s match proved something of a watershed moment for the Breakers early in the season, as they entered the night as one of two winless teams in the league so far in the first week. The Empire will look to avoid become a team’s “first” for the second straight match on Friday, as they welcome the Washington Kastles to the Bronx, who are 0-3.

On a night off from the WNBA basketball court, New York Liberty players Reshanda Gray, Nayo Raincock-Ekunwe and Marine Johannès were spotted taking in the tennis at the Cary Leeds Center, and they got to mingle with the Empire players after the match.

Venus Williams and the Kastles come to town on Friday, July 19 to face the Empire in a 6:30 p.m. match, in the first edition of #BattleOfTheJensens between Empire head coach Luke and Kastles head coach, brother Murphy. Follow results on WTT.com/schedule or at nyempiretennis.com, and watch the match live at WTT.tv and ESPN+.