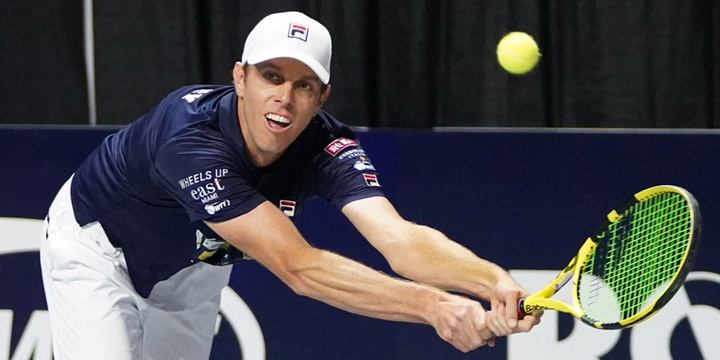 NEWPORT BEACH, CALIF.  – After suffering a one-game loss at home against the Orange County Breakers just a couple days ago, the Vegas Rollers turned the tide and returned the favor on the road with a key 17-16 win to jump from seventh place in the league standings to a tie in fifth place.

ROLLERS vs. BREAKERS  MATCH STATS | 2019 COMPLETE STANDINGS
“It feels good, we lost to this team in a heartbreaker just two days ago so it feels good to get them back,” Sam Querrey said. “Everyone on our team is great and fun and cool. So win or lose, it’s a fun experience. I’m on the team for one more tomorrow, but hopefully we can win that one and the next three at home and sync into the playoffs.”

“Coach Tim (Blenkiron) is amazing. He’s up every point, with a let’s go! And that’s what our job is,” Rollers assistant coach Redfoo said. “Our job is to get the best out of our players. And tonight we came away with a comeback victory and it is sweet. It is sweet indeed!”

Falling 5-4 in a tiebreak to James Ward just the other night in Vegas with the match on the line, Querrey came out on a roll, winning 12 of 13 points on his serve for a 5-2 win over the Brit.

Orange County got the momentum back in the next set however, with former Stanford standout Nicole Gibbs winning 15 consecutive points to close out a 10-minute 5-0 bagel. With Harriet Dart serving at 0-3 0-30, former USC standout Sabrina Santamaria got subbed in to make it a Pac-12 singles battle, but Gibbs was playing superb tennis regardless of who was on the other side of the net.

Luke Bambridge and Ward got their second win in three nights against Querrey and Matt Reid, converting their lone break opportunity for a 5-2 win that gave the Breakers a 12-7 lead heading into halftime.

Following the same script, Asia Muhammad and Santamaria got their second win in three nights against Andreja Klepac and Gibbs, winning 12 of their 14 first serve points for a 5-2 win that made Breakers fans nervous once again.

“Sabs and I are really good friends off the court, so we just had really good vibes,” Muhammad said. “When we saw the team was down, we kind of just said beforehand we have to play well. We have to do some good things to hopefully come back.”

Before last night’s 22-14 loss against the San Diego Aviators, Orange County contested four straight matches that were decided by a single game, and tonight ended up being no different.

Vegas locals Muhammad and Querrey earned two crucial breaks of serve in mixed doubles, with one coming on Klepac’s serve in the seventh game to win the match without even requiring Extended Play.

Querrey put on an absolute serving clinic throughout the night, firing 13 aces across his three sets and winning an astounding 28 of 30 points on his serve.

There was a strong University of California presence as a part of Orange County’s annual Cal Night. Breakers owner Eric Davidson, a proud alumni of Berkeley, was joined by many distinguished alumni including current Cal men’s and women’s tennis head coaches Peter Wright and Amanda Augustus. Former world number one and 12-time major doubles champion Mark Woodforde, a SoCal resident himself, was in attendance as well for the thriller.

Orange County has a rare doubleheader on Monday, hosting the Washington Kastles in a rescheduled match at 9 a.m. PT/noon ET that is free and open to the public, before hosting the Orlando Storm at 6 p.m. PT/9 p.m. ET. The morning match will have live streaming available on WTT.tv, while the evening match will be available on both WTT.tv, as well as on ESPN+. Querrey will feature in his final match for the Rollers on Sunday night at 10 p.m. ET/7 p.m. PT, with live streaming available exclusively on ESPN+.