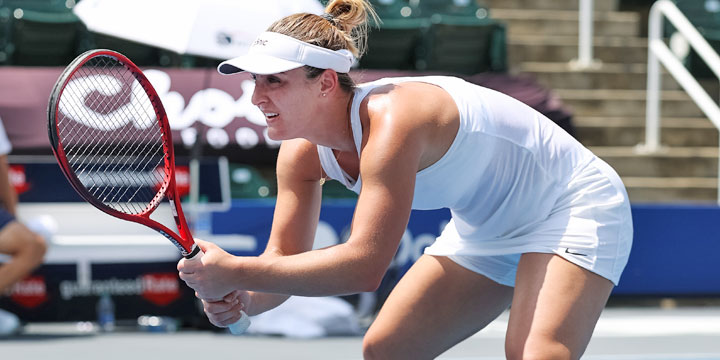 Gaby Dabrowski and Andreja Klepac capped off a late comeback for the Orange County Breakers, winning in doubles 5-3 before reeling off two more games in Extended Play over Jessica Pegula and Darija Jurak to tie the match at 22 games apiece.

The Canadian-Slovenian duo even saved two match points in Extended Play en route to breaking serve to set up a final showdown in the supertiebreaker which they won 7-5.

“I thought that was the set we had the best chance to win, and so that’s why I put it last,” said Breakers coach Rick Leach. “I also thought they (Dabrowski and Klepac) could make some games back if they needed too and they needed to make two, to catch up. They’re clutch. They really clutched out when they needed too. I’m really proud.”
Men’s and women’s singles matchups kicked off the day, featuring four Americans all ranked in the top-80 of the ATP or WTA rankings.

Steve Johnson notched another win for Orange County in singles, erasing an early break deficit to beat Tennys Sandgren 5-4 in a tiebreak and earning his second consecutive win over a top-55 ranked opponent.

Johnson called for back-to-back Geico timeouts at 4-4 in the tiebreak in an attempt to ice Sandgren and break his serving rhythm, resulting in a double fault from the two-time Australian Open quarterfinalist on set point that gave the Breakers an early advantage.

The second All-American matchup was underway as Jennifer Brady remained aggressive, playing to her strengths with powerful and heavy forehands but was often stifled by Pegula’s speed and court coverage. Pegula converted the lone break point chance either player had in the set at 3-2, before consolidating the break in the next came to capture the set 5-2.

Men’s doubles, like many sets this season at The Greenbrier, featured a foursome of former collegiate standouts. Johnson of USC teamed up with Austin Krajicek of Texas A&M, while Sandgren of Tennessee was paired with Ken Skupski of LSU.

After a dominant win in their previous match against the Bryan Brothers, Johnson and Krajicek dropped a close encounter 5-3 in the tiebreak to the SEC duo which gave Orlando a 14-11 lead heading into halftime.

Krajicek joined forces once again with fellow mid-season signing Dabrowski, however the duo lost a narrow mixed doubles set to Skupski and Pegula 5-4 in another tiebreak.

Dabrowski, the Guaranteed Rate Player of the Match, continued her stellar play with 2017 WTT Female MVP Klepac as the doubles stars erased the 15-19 deficit they faced heading into set number five to keep the Breakers alive in the match and eventually come out on top.

Orange County won a total of 132 points in the match while Orlando won 130 points. That is as close as it gets in a league whose motto is rightfully #EveryPointCounts.

Orlando will play their fourth match in as many days on Sunday, facing expansion franchise Chicago Smash at 4 p.m. ET. Orange County will look to continue their momentum Sunday evening when they face their Southern California rival, the San Diego Aviators, at 8.p.m ET. Both matches will be televised live on ESPN+.