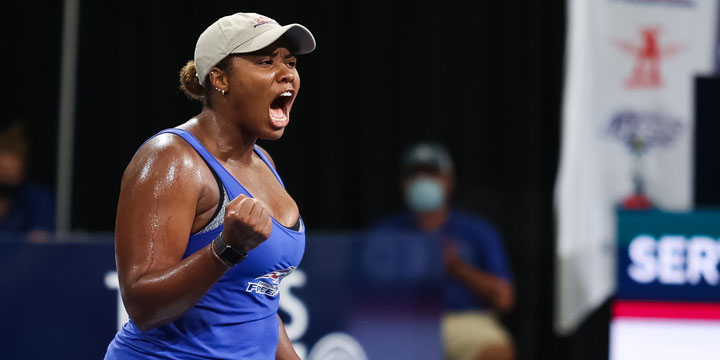 The last time the Philadelphia Freedoms dropped the opening two sets they suffered their only loss of the season to the New York Empire.

After dropping their first two sets today against the Orange County Breakers, the Freedoms were hoping history would not repeat itself. Thanks to the stellar effort of Taylor Townsend in the final two sets of women’s doubles and mixed doubles the Freedoms were able to post a thrilling come from behind 22-21 win and inch closer to clinching a spot in the 2020 World TeamTennis playoffs.

“Everyone supported each other today and that just shows our team chemistry,” said Townsend, who teamed with Caroline Dolehide in women’s doubles and Fabrice Martin in mixed doubles. “I think that was very important in our team getting the victory.”

Thanks to a 5-3 win by Dolehide and Townsend in the women’s doubles discipline, the match was deadlocked at 17-17 heading into the final set – mixed doubles – leading to the winner of that set taking the match.

Martin and Townsend are no strangers to this type of pressure having delivered many clutch wins for Philadelphia over the past three seasons. Martin and Townsend along with Orange County’s Steve Johnson and Gaby Dabrowski all holding serve, the match would be decided with a nine-point tiebreaker.

Martin opened the breaker holding serve with Townsend delivering an overhead before a patented Martin backhand gave Philly the early 2-0 lead. Johnson would hold serve with a pair of service winners before Townsend returned the favor with a couple of winners of her own giving Philadelphia the 4-2 lead in the race to five points. Orange County sliced the lead to 4-3 with a volley winner however Philadelphia’s Martin delivered another backhand that was returned into the net to seal the win.

“I thought the veteran leadership of Fabrice, Donald and Taylor was crucial especially down the stretch,” said Kardon. “We have a quick turnaround (Philly plays at 9 AM tomorrow against Orlando) so the fact we won today says a lot about the character of this team.”

The Breakers put all of the pressure on Philadelphia early with Steve Johnson knocking off Taylor Fritz 5-3 before Jennifer Brady surprised Sofia Kenin with a come from behind 5-4 win (winning 5-0 in the tiebreak).

Following the opening set of men’s singles, the skies opened up forcing the action to be moved inside. This was the second consecutive match in which Philadelphia started outside before being forced indoors.

Kenin opened the women’s singles set breaking Brady and then consolidating the break to take an early 2-0 lead. With Kenin leading 4-2, it appeared as though she was on her way to another victory before Brady unleashed an over the shoulder topspin forehand that Kenin could not return. It seemed as though from there it was all Brady as she came from behind to win the set giving Orange County a 10-7 lead.

For the past three years doubles have been a strong suit for the Freedoms and they showed why again as Donald Young and Martin would earn a hard-fought 5-4 win in men’s doubles slicing the deficit to 14-12 in the overall score heading into halftime.

Philadelphia would eventually level the match at 15-15 on a Townsend hold in the women’s doubles event. Feeling the tide beginning to turn, coach Rick Leach used a substitution taking out Andreja Klepac and inserting Brady with his team trailing 4-1. Brady would provide a spark slicing the lead to 4-3 before Townsend fought back from 0-30 to hold serve and level the match setting up the dramatic conclusion.

Sofia Kenin and Taylor Fritz dropped only their second match of the season in women’s and men’s singles, respectively. Orange County won 5 of 7 deciding points.