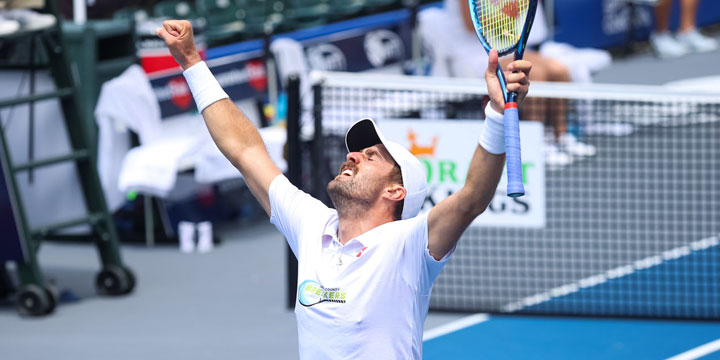 Steve Johnson’s favorite hockey team, the Anaheim Ducks,  isn’t in the Stanley Cup playoffs. His Orange County Breakers, however, still have a shot at making the World TeamTennis playoffs this season.

ORANGE COUNTY BREAKERS vs. SPRINGFIELD LASERS MATCH STATS
“We needed it for the team. We lost a tough one last night and I felt like we needed to bring good positive energy out there today,” Johnson said. “We did that as a team today and I couldn’t be happier to get a win.”

An early break was all Johnson and Austin Krajicek needed to win men’s doubles. That break, of Springfield’s Jean-Julien Rojer, gave the Breakers a 3-1 lead at the changeover. Everyone, including Springfield’s Robert Lindstedt, held serve the rest of the way to give Orange County the 5-3 win in the set and a 14-12 overall lead at halftime.

Johnson later teamed up with Jennifer Brady to wrap up the win, despite a 5-4 (5-3) loss in mixed doubles. That loss forced Extended Play with Orange County leading 23-21. Johnson served, and held, in the first set of the extra session to end the afternoon. He punctuated the victory with a fist pump in honor of Ryan Getzlaf and the Anaheim Ducks.

“It’s too bad my Ducks are out of the playoffs, but I’m still going to support them,” Getzlaf said. “It’s win or go home (for us) at this point. We’re bringing our best tennis every single day out here. It’s the end of the year. You can’t hold anything back.”

Springfield’s Mitchell Krueger came up clutch in deciding points to steal a 5-4 (5-4) men’s singles win from Johnson in the opening set. Krueger won three deciding points, including set point in the nine-point tiebreaker. Johnson got a mini-break of Krueger to take a 3-1 lead in that tiebreaker, only to see the Lasers newcomer win the final two points to put a bow on the win. It was an impressive victory for Krueger. Johnson had defeated world No. 24 Taylor Fritz in his previous outing.

Jennifer Brady won a wild, roller coaster of a women’s singles set in another tiebreaker. She started the set against Springfield’s Olga Govortosva and quickly built a 2-0 lead. Lasers coach JL de Jager subbed in Caty McNally, who immediately reeled off four straight games to take a 4-2 lead. Brady fought back to win the next two games and force the tiebreaker, but the twists and turns of that set weren’t done.

McNally, an 18-year-old WTT rookie, won the first four points of the tiebreaker, and was headed for an easy win. But nobody told Brady. She saved four set points, then won the deciding point to get the 5-4 (5-4) win and even the overall score at 9.

“I started off really strong,” Brady said. “(McNally) didn’t miss a ball and it was tough to play. We have completely different game styles. I played Caty last year, she beat me, so I was thinking she had a good game plan coming in. Once we got to the tiebreak, I think maybe she got a little nervous once I won one point and I was able to capitalize on that.”

Women’s doubles also featured a substitution and the third nine-point tiebreaker in four sets. The teams traded early breaks and were even at 2 at the changeover. Orange County coach Rick Leach subbed Brady in for Andreja Klepac early and she helped teammate Gabriela Dabrowski push in front 4-2. Springfield’s McNally and Hayley Carter won the next two to set up the tiebreaker, but they couldn’t make it three games in a row. The Breakers took the set 5-4 (5-3) and headed to the final set with a 19-16 lead.

The Lasers get an early start Sunday morning, facing the Orlando Storm at 9 a.m. Eastern on ESPN+. The Breakers get a day of rest before they host the Chicago Smash at 10 a.m. Eastern on the Tennis Channel.