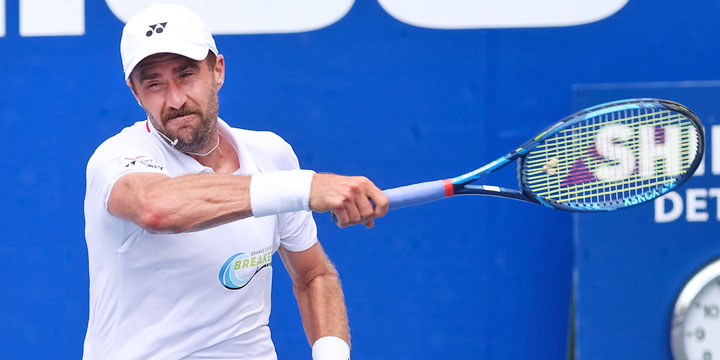 Having already clinched one of the four WTT Playoff spots, the Chicago Smash suffered just their third loss of the season at the hands of the Orange County Breakers, as the 2014 and 2017 league champions earned their second consecutive win in Extended Play to remain in playoff contention.

“I think we have really put it together as a team,” Steve Johnson said. “Fortunate that we put it together at this point. We could have put it together hopefully a little sooner, but that’s just the way it goes sometimes. We’re still not out of it yet, so we are going to do our best to win our last two and give ourselves a chance to get to the playoffs.”

Johnson of USC and Jennifer Brady of UCLA set aside their crosstown college rivalry in hopes of getting the Breakers off to a good start in set number one against the Smash.

Orange County’s team of Brady and Gaby Dabrowski had a tough test next in women’s doubles, with Bethanie Mattek-Sands and Genie Bouchard the most successful doubles combo of the 2020 WTT season.

The American-Canadian duo evened the match back up at eight games apiece, beating Brady and Dabrowski 5-3 as a result of converting their lone break point opportunity. Both teams followed a very similar strategy, giving Brady and Bouchard opportunities to battle from the baseline, while the two highly elite doubles players looked to be involved at the net.

Johnson continued his stellar play from doubles, taking down 2019 ACC Freshman of the Year Brandon Nakashima. The two-time NCAA singles champion was locked in early and looked to run around his backhand as often as he could against the 18-year-old.

After finding success with calling consecutive Geico timeouts before a big deciding point earlier in the season against the Orlando Storm, Johnson used the strategy again to ice the rising star. Blasting a forehand on the return to force an error from Nakashima to go up 3-1 in the set, Johnson earned the momentous break he needed and even earned another one to close out the set at 5-1.

Holding a 13-9 after halftime, Brady had a cushion to work with against the 2017 US Open champion Stephens. Controlling play from the baseline and jumping out to a quick 2-0 lead, Brady held the early advantage before the two Americans exchanged breaks in the next two games.

The former UCLA standout took a 3-1 lead heading into the changeover which led Smash coach Kamau Murray to insert Bouchard in hopes of changing the tide. The 2014 Wimbledon finalist was blitzed and wasn’t afforded the opportunity to find her way into the match, as Brady extended Orange County’s lead even further with another 5-1 win.

Former University of Michigan standout Evan King joined the action in the fifth event to make it four former collegiate standouts on court, with the lefty and 2020 Australian Open champ Ram of Illinois facing Johnson and Krajicek of Texas A&M.

Chicago won the set in a tiebreaker and also won the first game of Extended Play, before Krajicek held at love for the 23-16 Breakers victory.

“You either apply the pressure or receive it,” Johnson said. “We were trying to apply today early and thank goodness we got off to a good start. I think Jenny really put us over the top today.

“It’s win or go home. We’ve got to bring the fire every single match.”

Orange County dropped both deciding points in each of the first two sets of the match before Johnson won all three in his men’s singles set against Nakashima. Although Johnson won four more games than his younger counterpart, there was only four single points separating the two in the set. 20 for Johnson and 16 for Nakashima.

Both teams have a day off on Tuesday before returning to action on Wednesday. In a battle of the top two teams in the league, Chicago faces the Philadelphia Freedoms at 8 a.m. PT while Orange County faces the New York Empire at noon PT in a pivotal match for the fourth and final playoff spot. Both matches will be televised live on Tennis Channel.